As this will be posted on Christmas day, I thought a post about my favourite Christmas song—and my second favourite song about birds [1]—would be in order. I particularly like The Twelve Days of Christmas because the words are secular, it originated in an 18th century memory game, the period celebrated is (or was) all about drunkenness and merrymaking sandwiched between two religious feasts, and the gifts were mainly birds. In mediaeval England, those 12 days were presided over by the Lord of Misrule and in Scotland by the Abbott of Unreason, both titles that I would be proud to bear.

The words to this Christmas song were first published in English in the late 1700s as a rhyme in a book called Mirth without Mischief, likely derived from a much older French song of similar sturcture and content, Les Douze Mois. The now familiar tune was not written until 1905 by the English composer Frederic Austin who adapted it from a traditional English folk melody.

As you will recall—for by now it’s an ear worm that you can’t stop humming—the 12 days begin on Christams Day with the partridge. On 5 or 6 of the following days, the gifts are birds, interrupted musically, thematically and enigmatically by those 5 golden rings. I have no idea why the first 7 gifts are birds, but I expect there are traditional and psychological reasons that have been claimed for this. There have also been many Christian interpretations of this song but really no evidence to support any of them. I find the secular interpretations to be far more interesting and valid.

In the 237 years since the rhyme was first published in English, there have been at least 20 different versions of the words, especially with respect to the birds. Some of these variants are undoubtedly Mondegreens [2], but they were often probably just attempts to make the words more relevant to a contemporary audience. 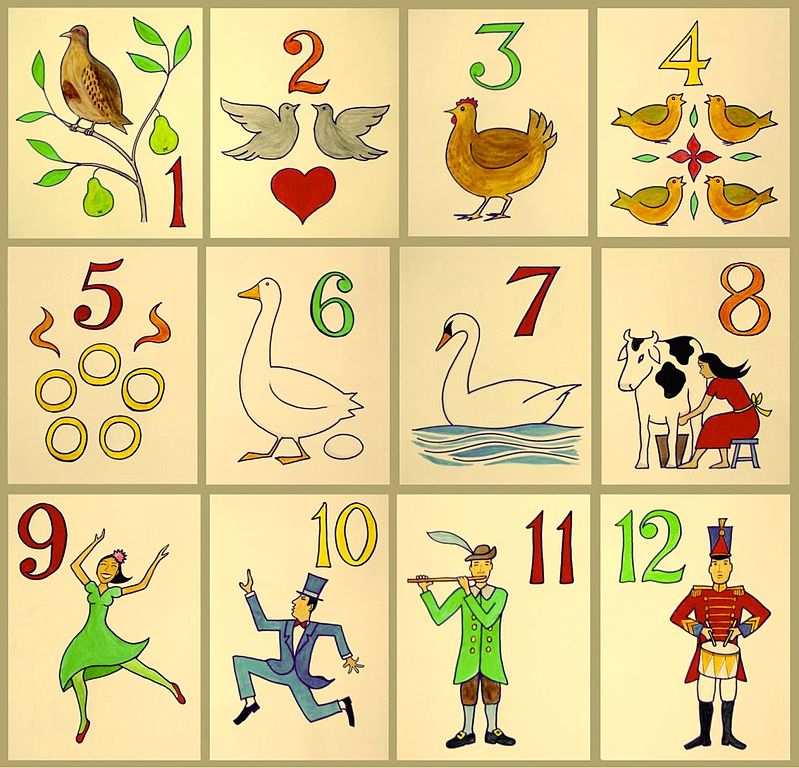 On day 2 the TURTLE DOVES were French hens in one 1877 version, and the FRENCH HENS on day 3 were once ‘fat hens’ in 1864, and turtle doves in 1877. There’s a theme here as the first 3 birds were highly prized for the table, an excellent start to a period of feasting.

The CALLING BIRDS of day 4 are the most intersting to me as the original said ‘colly birds’ and subsequent variants said the birds were ‘canary’, ‘collie’, ‘colley’, ‘colour’d’, ‘curley’, ‘coloured’, ‘corley’, and finally ‘calling’ by Austin in 1909 published with his new tune. I am surprised no one ever suggested ‘collared’. The original ‘colly bird’ was the European Blackbird (Turdus merula) as ‘colly’ meant ‘black’ as in ‘coaly’, and is why border collies bear that name. The subsequent versions are undoubtedly the result of mis-hearings and misinterpretations.

The gift for day 5 in the original and modern version is ‘golden rings’ but several sources claim—correctly I think—that these are birds too, probably European Goldfinches, which were called goldspinks in the 1700s. Others have argued that these were Ring-necked Pheasants which have been claimed to have golden rings around their neck (but they don’t). The pheasant interpretation matches the culinary theme of the other 6 birds in the song, but the goldfinch was a popular cage bird in the 18th century. The melodic break in the song suggests a change of theme but the melody was added more than a century after the words.

The birds of days 6 and 7—the geese and the swans—round out the culinary theme before the song turns to dance providing some exercise after all that feasting, and chores that may have been neglected,

I am spending the holidays in the north woods just west of Algonquin Park where the colly birds (and the only birds really calling) are Ravens, and the only ‘partridge’ is the Spruce Grouse, as all the geese, swans, doves, and goldfinches have departed for much warmer winter quarters. Counting the 5 golden rings there are 28 birds in The Twelve Days of Christmas but I will be lucky to see even 28 individual birds on a day out in the winter woods here. That will not stop the 75 or more people who gather here for the Christmas Bird Count (CBC) on 30 December where they will probably record fewer than 28 species in a hard day’s work on foot, skis and snowshoes. This will be the 44th consecutive CBC for Algonquin Park and the 118th CBC since Frank Chapman started the count in 1900.

During the 19th century the Christmas Side Hunt was a popular competition to gather game for the table during the 12 days of Christmas. Chapman, however, was a conservationist who saw great value in watching rather than hunting birds. That first CBC Involved only 27 birdwatchers at 25 sites from Toronto, Ontario, to Pacific Grove, California, laying the foundations for what we now call citizen science.

1. While not actually about birds, my favourite song that refers to birds is The Edge of Seventeen originally performed by Fleetwood Mac but here in a fairly stunning and recent performance by Stevie Nicks accompanied by Waddy Wachtel. It’s also hard to beat Lori Anderson’s Excellent Birds

2.  Jimi Hendrix created a classic ‘Mondegreen’ when he sang (at least to my ears) “‘Scuse me while I kiss this guy” in his song ‘Purple Haze’, first released as a single in 1967. Rock lyrics are a rich source of Mondegreens—words or phrases that are misheard—as Sylvia Wright, who coined the term, did when she heard a Scottish ballad say “Lady Mondegreen” when it actually said  “laid him on the green”.

AOS has rights to use all photos posted.

Specific credit for the images is listed on the webpage they are posted.