When I took first-year Zoology at the University of Toronto, in the 1960s, our lab instructor/coordinator was Dr J. Murray Speirs. Speirs was a kindly gentleman with a bit of old-world charm, accentuated by his ever-present black beret. I warmed to him immediately because he was also a birder and had a reputation for encouraging young naturalists [1].

That warmth cooled somewhat when Dr Speirs gave me a ‘B’ grade for my bird list from a weekend class lab project where we had to record all of the birds seen in a day’s outing. My non-birder friends all got ‘A’s so I was particularly puzzled. When I asked him about my grade, he said that he gave me a ‘B’ because “every bird has a name, and you failed to name them all”.  I had listed 3 unidentified buteos and a half-dozen unidentified peeps, whereas my more-savvy confrères had—I found out later—fudged their reports based on what the bird books told them to expect in late September in Toronto [2].

Dr Speirs was married to Doris Heustis Speirs, who I met only once, at their home in Pickering, just east of Toronto. This was on a weekend birding/photography outing with my friends George Peck and Jim Richards. As we left the Speirs’s home, I commented that Doris really knew her birds. To which they replied “Yes, and she also founded the nice bird club”. “Interesting,” I said, “but what’s so nice about it”. They laughed: “No, no. It’s the Margaret Nice Bird Club, named after that famous woman ornithologist, and it’s open only to women.”

At a dinner with the Speirs on 10 Jan 1952, the biogeographer Miklos Udvardy was appalled to learn that his wife Maud would not be allowed to attend that evening’s meeting of the Toronto Ornithological Club (TOC). Murray and Miklos were going, but the club was ‘men only’ [3]. Udvardy’s response was priceless: “Is this the fourteenth century?” He then suggested to Doris that she start an ornithological club of her own, for women only [4].

A week later, Doris had lunch with two friends—Irma Metcalfe and Marjorie Lawrence Meredith—interested in birds, and they decided to start just such a club. They chose to call it the Margaret Morse Nice Ornithological Club (MMNOC), in honour of one of the pioneers of behavioural and evolutionary ecology of birds, a renowned ornithologist, and, in those days, one of the few well-known women who studied birds. They limited membership to 12 women, and their little club flourished for the next 35 years.

Doris met Margaret Nice at the American Ornithologists Union meeting in October 1938 in Washington, DC. At that meeting, Margaret was one of four speakers in a symposium— ‘The Individual vs. the Species in Behavior Studies’ [5]. Her paper ‘The Social Kumpan in the Song Sparrow’ was published in The Auk in 1939 and pays homage to her friend Konrad Lorenz and his foundational ideas about social interactions. Based on her own studies of the Song Sparrow, Nice’s paper and her participation in the symposium illustrate her stature as one of the leading American ornithologists of the day. Doris was enthralled with meeting Nice and wrote to her brother about their conversation about Doris’s own research: “…she questioned me on my research with evidently a sincere and even keen interest, as though I could really contribute to her knowledge of bird behaviour by my observations. Her simplicity, her deep humility and sense of awe and wonder were evidences of her greatness.” [6]

Thus began a lifelong friendship and an obvious reason for the name that Doris gave to her bird club. Here is Nice on that friendship in a letter to Speirs: I feel that the study of ornithology is a wonderful game in which strong sympathy and fellowship reign between the serious participants: we are friends and glad to help one another. We have high standards for our science and we want beginners to realize this [7]. Nice visited the Speirs home several times, and there got the inspiration for her seminal review on avian incubation periods, published in The Condor in 1954. The Speirs maintained a fabulous ornithological library in their home and Nice began exploring their books to see what some writers, as far back as Aristotle, had to say about incubation. She noticed, for example, that new bird books often reported different incubation periods for the same species [8].

In 1979, a few years after Nice died, the MMNOC published her autobiography Research is a Passion with Me as a tribute to their patron saint. It’s not often—not often enough—that scientists, and particularly ornithologists, write their own stories and those by Charles Darwin, Margaret Nice and others are a treasure trove for historians of science about how the authors viewed themselves. One must, of course, read an autobiography with that in mind as the authors do have a certain bias, may leave out the unflattering bits, and have no real appreciation for the historical (in retrospect) context of their lives and research contributions. All that said, Nice’s autobiography is—as is Darwin’s—a wonderful read and was, for me, an inspiration. It was published, and I read it, in the year that I completed my PhD and it reminded me once again that it was OK to be passionate about research, and that persevering in the face of great odds was (or at least could be) very rewarding [9]. 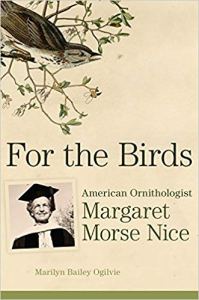 Soon I will be reviewing a new full-length biography of Margaret Morse Nice in Birding magazine. This book—For the Birds: American Ornithologist Margaret Morse Nice by Marilyn Bailey Ogilvie (University of Oklahoma Press)—was published in September 2018 and is the first biography of this remarkable woman. While Nice’s autobiography gave us lots of insights into her life and research, Ogilvie’s book is richer with detail and context. Ogilvie was Curator of the History of Science Collections at the University of Oklahoma where much of Nice’s archives are housed, and she appears to have read everything that Nice ever wrote including letters, manuscripts, and publications, as well as talking to many of Nice’s relatives, friends and colleagues. Ogilvie chronicles an important period in biology, when women often struggled to do research and to obtain some recognition for their many accomplishments. In part, because of women like Margaret Morse Nice and Doris Huestis Speirs, they witnessed a sea change in the roles and prominence of women to ornithology during their lifetimes.

IMAGES: the Speirs from Iron and Pittaway (2010) colour-corrected; book covers by the author.

15 thoughts on “The Nice Bird Club”

AOS has rights to use all photos posted.

Specific credit for the images is listed on the webpage they are posted.